By Valerie Wilkins
When I contacted Robynn about being interviewed for this article, she responded with an enthusiastic “Yes!” A few days later, she followed up with directions to her house and an invitation to come for dinner too! As I got to know Robynn during the interview, I learned that this thoughtfulness and generosity is a big part of who she is.

Robynn grew up just across the lake in Elizabethtown, New York. She caught the hiking bug early on from her dad who enjoyed taking the family on regular hikes in the Adirondacks. Robynn still hikes with her dad on occasion. In fact, when she led a group up Giant Mountain this fall, her dad joined the group for the hike and for a healthy serving of pie at the Noonmark Diner afterwards!

Since her early years, Robynn has continued hiking and has added snowshoeing and biking to her list of favorite activities. Until recently, most of her time outdoors has been on her own or with one or two friends. But, through her recent association with the Green Mountain Club, she has come to love sharing the outdoor experience with others.

Robynn first learned of the Green Mountain Club in the spring of 2007 when she saw an ad in the local newspaper for a GMC slide show at St. Michael’s College. At the slide show, she met up with friends Russ and Lilo Kinaman and had a wonderful evening. She picked up a GMC brochure and joined the club soon after. Her first GMC hike was on Linda Evan’s annual Sadie Hawkins Day outing. Robynn came away from that first hike inspired to get more involved with the club.

In April 2008, Robynn participated in a trip leader orientation led by Rich Larsen and Paul Houchens. On the hike to Nebraska Notch and Taylor Lodge, Robynn displayed her sense of adventure by going with Paul, Phil Hazen, and a few others on the more difficult Clara Bow Trail while the rest of the group went on the more moderate Long Trail. With lots of snow and ice on the trail, the Clara Bow Trail turned out to be quite challenging, but they all had some good stories to tell when they rejoined the group at the lodge!

Robynn’s first trip for the GMC was on a perfect July 4th day when she led a group of seventeen people and four dogs to the summit of Camels Hump. What Robynn loved most about this hike was witnessing the relationships that developed among the people in the group as the day progressed. Whether folks signed up for the hike with a friend or on their own, everyone found some camaraderie and good conversation out on the trail that day. At the top of the mountain, they all gathered for a photo. When they got back to their cars, they enjoyed refreshments before heading their separate ways.

When I asked Robynn if there was anything Ridge Lines readers would enjoy knowing about her, she shared that one of her dreams is to own a red ’64, ’65 or ’66 Mustang convertible. As I left Robynn’s house, I could tell she was still thinking about my question. A few days later, I received an email from her with another great story about a construction job she held for three summers during college. Her first day of work involved hauling brush in the woods and throwing it into a chipper. She was quite nervous, as she was the only female on the job. But her fears were unfounded. She wrote that her male co-workers on the job could not have been nicer and made her feel like part of the crew right from the start. This ability to connect with and appreciate other people seems to come naturally to Robynn. 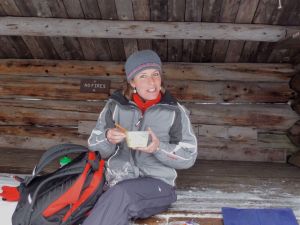 This entry was posted in People: Profiles, Stories, News. Bookmark the permalink.