Bushwhack: Caught in a Winter ‘Spruce Trap’ (and how to save yourself!)

Posted on 02/28/2009 by Green Mountain Club - Burlington Section | Comments Off on Bushwhack: Caught in a Winter ‘Spruce Trap’ (and how to save yourself!)

By Robynn Albert
I’d read that there was going to be a bushwhack led by Len Carpenter. I didn’t know what a bushwhack entailed, so I decided to see for myself. It was a beautiful, clear, cloudless, sunny late winter day as eight of us started up a marked trail at the beginning of our hike up Dewey Mountain, which is next door to Mt. Mansfield. Then Len announced that the bushwhack was going to begin! We started making our way through trees and shrubs and brush. One member of our group fell through not one but two spruce traps. (Spruce trap – another new concept for me!) The second time, Len explained how to get yourself out of a spruce trap if you’re alone. Read below. We reached the top of the mountain and signed in. Then we called one hiker’s mother, as it was her birthday. The whole day was pure and total fun and laughs! Of course, the people were a big part of the fun. – 3/2009

A spruce trap occurs when deep snow hides a cavity between buried branches. A person on snowshoes comes along, steps on what looks like solid snow and instantly sinks in, sometimes up to his or her neck. (In general, skiers don’t fall into spruce traps because their skis spread their weight over a larger area.) It’s very difficult to get out of a spruce trap on your own. Here are Len’s suggestions:

First – Don’t panic! Stay calm. Take the time to think and plan how you’re going to get out.

Second – Don’t thrash around. Don’t move your feet or try to get your snowshoes out. Struggling to free your snowshoes will only get them more tangled up in the buried branches and is likely to result in you going deeper and deeper in the hole.

Third – If there’s a tree trunk nearby, you might be able to use it to pull yourself up. Most times, though, you’ll have to do two things to get yourself out. 1 – Use your hands and ski poles to dig all around you, making a wider and wider opening. (If the ground is sloped, head downhill when you’re digging.) 2 – Take your two ski poles and lay them on the snow in an X in front of you. If they hold, use them to pull yourself up.

After you’ve dug away a lot of the snow around you, you might be able to hook your snowshoes with the end of your pole and use them both for digging and to support you as you crawl out. However, don’t focus on your snowshoes until you’ve worked out a logical escape route. 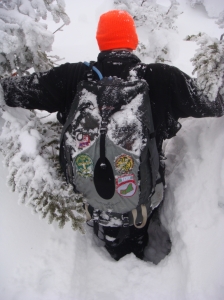 This entry was posted in Before You Go: Tips and Advice, People: Profiles, Stories, News. Bookmark the permalink.