Every one of the Green Mountain Club’s shelters, lodges and tenting areas has an adopter. These volunteers check on their sites, do basic maintenance, organize work crews as needed, and keep the GMC’s field coordinator up-to-date about the condition of the shelters. In the June 2009 issue of Ridge Lines, we featured the adopter of Duck Brook Shelter, Kerstin Lange. In this issue, we feature two more adopters, men who have spent literally thousands of hours volunteering for Green Mountain Club.

By Valerie Wilkins
Buchanan Shelter rests on the southwest slope of Bolton Mountain on a short spur off the Long Trail. In addition to the Long Trail, several backcountry ski trails maintained by Bolton Valley Resort pass close by the shelter, making it an attractive destination in all seasons.

In 1995, the shelter was adopted by two members of the “Old Goats,” a group of retirees who took upon themselves to keep the Bolton trails cleared and ready for skiers. Gardiner Lane was the first “Old Goat” to take up the helm at Buchanan Shelter. He became shelter adopter when Roy Buchanan, for whom the shelter is named, retired from trail and shelter work at age 78. Soon after, Gardiner recruited his friend and fellow skier Clem Holden to help with the shelter work.

In 2001, at the age of 78, Clem talked with Gardiner about retiring, but Gardiner said NO WAY. The men continued working as a team until Gardiner finally retired in November 2003, when he was 89 years old. Clem recruited another “Old Goat” to join him as shelter adopter – Herm Hoffman. They’re still doing this vital volunteer work, with Clem now “in his 87th year” (as he likes to say) and Herm in his 74th year.

Buchanan Shelter was built in 1984. The sturdy building has an open-front porch and enclosed bunkroom with space for 16. It has welcomed many hikers, skiers, and snowshoers looking for a place to rest or to spend the night. Over the past 14 years, Gardiner, Clem, and Herm have been wonderful stewards. Clem and Herm proudly tell a story that illustrates the importance of shelter adopters. On their regular visits to the shelter, they noticed that the shelter was becoming increasingly cluttered with things like pots and pans, cooking utensils and books that people had left behind, thinking they might come in handy to future visitors. However, all this stuff was starting to detract from the beauty of the shelter and its surroundings. To remedy the problem, Clem and Herm made several trips to haul everything out of the shelter. They believed that by keeping the shelter clean they would encourage other folks to leave the shelter in the same shape they found it. Over the years, this has proven to be the case. Today, the Buchanan Shelter continues to offer a pristine wilderness experience not far from the comforts of Bolton Valley Resort.

Clem and Herm quickly become animated when they describe their many adventures with friends and family on the familiar ski and hiking trails around the shelter. Their favorite way to visit the Buchanan Shelter is on skis and snowshoes. In the early spring, they often make the trip a triathlon of sorts: they walk along the Broadway Ski Trail until they find enough snow to ski, strap on their skis and ski as far as then can on the Deer Run Trail, and finally switch to snowshoes for the final steep ascent to the shelter on the Long Trail.

Clem is an experienced downhill and backcountry skier. When the Stowe Mountain Resort first opened in the 1940s, Clem would hitchhike from Burlington to Stowe every weekend to enjoy the snow-covered trails. Since then, Clem has skied in many different places throughout North America, including some memorable hut-to-hut ski trips in British Columbia. Although his travels have taken him to many places, Clem still takes great pleasure in the trails and his many friends at Bolton Valley. If you look closely as you make your way through the final S-curve on the drive to the resort, you may see a sign that says “Clem’s Tele Show-Off Hill” – erected in honor of his skill at carving beautiful telemark turns through the snow.

When they take off their skis in late spring, Clem heads for the lake to go swimming, canoing, and kayaking and Herm heads to the mountains to go hiking. In 1995, Herm became an Adirondack 46er, having climbed to the summits of the 46 (actually 47) highest peaks in the Adirondacks. Over the years, Herm has led many popular outings for the Burlington Section. He is also well known for his wonderful pencil drawings, including drawings of Buchanan, Taylor, Butler, and Taft Lodges. In fact, Herm’s drawing of Taft Lodge can be found on the cover of the our Ridgelines newletter! 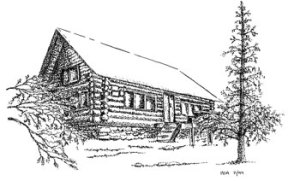 When I contacted Clem to arrange an interview, he made sure I included Herm as well. They cited their camaraderie – and the time spent with the “Old Goats” – as prime motivators for their continued trail and shelter work. Those of us who enjoy hiking and skiing on the trails near Bolton Valley have many reasons to thank Clem and Herm! By getting out in the woods to maintain the trails and shelters, and by encouraging others to come along with them, they ensure that we all have some phenomenal hiking and skiing opportunities close to home.

This entry was posted in People: Profiles, Stories, News. Bookmark the permalink.