12/19/09 Mansfield Ridge
Three participants, two full-time, with parts of two others. It’s a little hard coming up with the right “participant” list for this hike, for reasons that will become apparent, so I’ve listed only Phil, who started and ended with me. Two potential participants called to cancel in the last days before the hike, but Phil and David H. met at the Underhill commuter lot and drove all the way up to the ranger’s station at the state park in Phil’s truck (the gates were open), and donned snowshoes and started hiking around 9 AM. The original plan was to head up Sunset Ridge, across the Mansfield ridge, and down Maple Ridge and the CCC road. But David Warren wanted to start at Stevensville and go up Frost and Maple Ridge, down the CCC road, and meet us at the Sunset Ridge trailhead. It was sunny, but the weather was cold (around -4 F), so I wasn’t willing to wait around, and told David we’d reverse the planned loop so we could meet him along the CCC road or Maple Ridge as he came from the other direction. We got to the Sunset Ridge trailhead around 9:30, and David W. wasn’t there, so we continued on the CCC road and met him about 20 minutes later. He didn’t want to go back up the steep lower parts of Maple Ridge, so he continued in his clockwise loop and we continued in our counter-clockwise loop. We’d been following ski and snowshoe tracks until then, and followed his tracks on the CCC road Maple Ridge until we got to the Frost Trail junction, but from there we (mostly Phil) had to break trail. Despite the unbroken trail, we only lost the trail once, very briefly. David’s feet were getting cold, so in the little hollow just below where the Wampahoofus trail joins, David stopped to put some foot warmers in his boots, while Phil charged ahead. As David was on the upper rock section just below the forehead, he saw someone else coming up fast from behind, who turned out to be Pete Osler, a friend of David’s from work. We hit the Forehead around 11 AM and from these point we three (Phil, Pete, and David H.) more or less hiked together. David had been holding Phil back, so we met David W. coming the other way just before we got to the summit road to the radio antennas. We each continued on in our own direction and that was the last we saw of David W. The Mansfield ridge was pretty bare, with thin snow and ice cover in most places, and we to the Chin (summit), reaching it at about 12:30. Pete was getting cold and started racing down Sunset Ridge, but David and Phil were close behind most of the way. We continued down the Sunset Ridge and CCC road to reach Phil’s truck around 3 PM. From there we went back to David’s car, and Phil gave Pete (who didn’t have a vehicle) a ride back to his house Jericho. Participants: Phil Hazen, Trip leader: David Hathaway

12/5/09 , Camel’s Hump via Monroe Trail
The start of muzzleloader season in Vermont had Rich distributing to those who needed them brightly colored vests and such. (Thank you, Rich!) A nice size group of eight headed out from the upper lot of the Monroe trailhead on this overcast but warm for this time of year December day. Not a drop of snow at this point. What better to do on a GMC outing this close to the holidays than have a running holiday trivia quiz? I had planned on holding this last year, during a scheduled hike for the day after Christmas 2008 but if you remember it poured, hence the hike being canceled. So one year later, the trivia made its way out of my computer archives. (How many times did Professor Hinckle need to write “I am very sorry” to Frosty as per Santa for melting him? 100 zillion.) The trail started out as a combo of mud and dry, then a few patches of snow made their way into our view. The microspikes came out as the snow and ice led us to the clearing and then the summit. No wind at the summit – how often does this happen on top of the Hump??? Also, very few people were hiking at the same time we were. I think we met maybe 25 the entire day. (What is the last song sung in the Charlie Brown Christmas special? Hark the Herald Angels Sing) Thank you to Mark’s mother for making us brownies (again) and giving us a bit of history of the 1960’s downed plane. His cousin wrote a book on the crash a few years ago, pieces of which are still scattered on the mountain. (Speaking of mountains, what is the mountain that the Grinch lived on? Mt. Crumpet)
Mary was the big winner, answering 14 correct in the trivia quiz, followed by Kelley with eight and 3rd place went to Sheri Larsen with four correct replies. Prizes were awarded to all. (What is Rudolph’s father’s name? Donnor) And speaking of prizes, this report would not be complete without naming Rich Larsen the fashionista of the day with his bright, bright, bright orange Elmer Fudd-type hat. It was something to be seen, if only once. Or maybe not……!! He thought it best to leave his bear hat at home. We were grateful!
Rich Larsen, Sheri Larsen, Phil Hazen, Mark Blanchard, Kelley Mackison, Mary Keenan, Kathy Adams; trip leader: Robynn Albert
Photos by Sheri Larsen:
Microspike circle; group shot (minus Sheri the photographer); Robynn asking a quiz question, and an arty shot of ice. 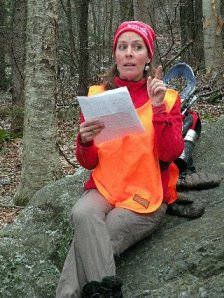 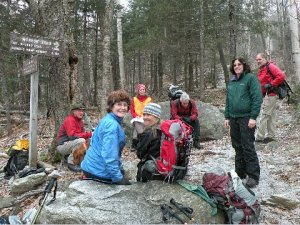 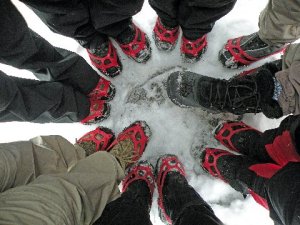 Mt. Abe via Battell
November 29, 2009
Due to the inclement weather forecast for Saturday, November 28, the day this outing was scheduled to take place, I moved it to Sunday, the 29th. I had no plans and was not stepping on anyone else’s scheduled hike for this day. Luckily, this worked out for most that had signed up for the Saturday hike. It proved to be a super day (even though Saturday did turn out to be a nice one, too) and five of us in total headed out on the trek via Battell. Met a few others along the way, some who must have turned around as we did not see them again, I assume based on their footwear. We encountered quite a bit of snow, not sure on measurement, but a guesstimate would be 9-10″ from the Friday night storm that hit various areas. A short stop at the shelter with some delicious chocolate and peanut butter cookies from Nancy were enjoyed by all. Top was a bit windy and much visibility of the valley, but not too much of the Adirondacks nor the Whites. Another short stop at the shelter on the descent and more cookies, we made our way to the trailhead and our cars. On the way up, we noticed some blood in several spots along the trail and what looked like the remains of a deer about 20′ from the trail. We were very curious about what it might be on the down, so the five of us examined it closely for about 8-10 minutes. Not a deer, not a fawn, not a dog (all speculations) but we concluded it was a coyote. And was skinned from head to just above its feet, probably to be turned into a nice rug to be placed in front of someone’s fireplace! It was pretty intriguing. Submitted by Robynn Albert; In attendance (all GMC members) Bob Stahl, Nancy Spier, Kathy Adams, Phil Hazen

Hedgehog Brook, moved to Camels Hump
September 19, 2009
Russ Kinaman
4 participants, plus four other GMC people. The Hedgehog Brook group met at the Richmond Park and Ride, ran into four other GMC folks, and decided to change to a mutual destination to have a larger group. Instead of Hedgehog Brook, the hike started at the Forest City trailhead, and went up to Montclair Glen. This was followed by a loop on the Allis Trail, and back down Forest City. It was a beautiful fall day, with a good group. Participants – Anne Judson, Carolyn Elliott, Tim Parson, Russ Kinaman

Hurricane Mountain
September 20, 2009
Richard Larsen, subbing for Sheri Larsen
Four Participants. Sheri Larsen was the scheduled leader, but she had injured her leg on Mount Washington three weeks prior, so Rich was signed up as a substitute leader. Three of us met in South Burlington at 8 AM, and drove to the trailhead by 9:45 AM, where we met up with Robert Preisser who had driven up from Albany. It was a cool, totally clear, late summer day. We started up at 10 AM, and had a leisurely stroll to the top in two hours. Hurricane is similar to Camels Hump, but a little longer distance and a slightly shorter climb. After about 1/3 of the climb, it has a nice open area with some views. On top, there is a fire tower, but it is not open for climbing. We lounged near the tower for an extended period, taking in the clear views of the Adirondacks, and of the Green Mountains back in Vermont. Eventually we had to head back down, and got to the cars around 2:15 PM for our various drives home. Participants – Robert Preisser Russ Kinaman, Julie Soquet, Richard Larsen

Wampahoofus
October 4, 2009
Russ Kinaman
3 participants. There were not many phone calls from perspective participants, probably since the weather forecast was not good. It turned out to be, however, a nice day and a nice hike. The rocks on the Frost Trail and on Maple Ridge were a bit slippery, and the Wampahoofus was wet, but fun. The group had lunch at Butler Lodge. Participants – Kathy Adams, Phil Hazen, Russ Kinaman

October 11/09
Phil Hazen
HIke – Mt. Mansfield
4 participants. Well, part of the “really” long range weather forecast was right – it was “crisp”, it was “crystal clear” (at times), but at other times it snowed, it hailed and the wind blew. In spite of these minor obstacles, we had some fantastic views and fall colors. (See some photos posted and many more at the November 6 “short clips” of “Great Trips” event.)

We started from Underhill State Park and followed the CCC Road to the Maple Ridge Trail. About half way there the hail & snow started and visibility dropped noticeably. Ted (Albers) wanted to call in the Burlington Section Helicopter for a rescue, but I told him that he would have to pay for it as he could still crawl. At that point we met a hiker coming the other way looking for the Stevensville Trailhead. Rich (Larsen) informed him that it would be probably quicker to turn around and follow us to the turn off to the Frost Trail. ( He had come from Taft Lodge that morning following the Maple Ridge Trail down. Missed the turn!)
As we got out in the opening on the Maple Ridge Trail, conditions could best be described as blustery and visibility not great. A revised routing over the Rock Garden Trail to Butler Lodge looked like a better option. Rich pondered this a bit and decided to go back down for some more “Dunkin Donuts” coffee. Then we were three. The Rock Garden Trail turned out to be quite a treat of light fresh snow and clouds breaking up with splashes of fantastic colors and views.
We stayed a bit at Butler Lodge with some Bucknell University students cooking breakfast. It cleared pretty much and off we went to finish our journey via the Long Trail to the Forehead and the Chin with great views and colors all the way. We finished by going down the Sunset Ridge Trail. Participants: Ted Albers, Miguel Bosse, Rich Larsen, and Phil Hazen.