8/25/12 Whiteface Mt. by way of Beaver Meadow Trail
A beautiful sunny day greeted five enthusiastic hikers. (leader – Carlene Squires, Jeanne Sicard, Pat Weston, Dave Hathaway, and Lynda Hutchins) and one canine companion Callahan). The Beaver Meadow Trail is a fairly gentle walk to Beaver Meadow Lodge. From there we began a steady and quite steep ascent on the Chilcoot Trail to the Long Trail. We passed the Robert Hagerman lookout with outstanding views of Madonna and Mt. Mansfield and continued to Whiteface Shelter for lunch. After lunch we climbed to the summit of Whiteface Mountain and had two more views. One looking towards Mt. Mansfield and Camel’s Hump and beyond and the other looking at Belvidere Mt. We returned to the Whiteface Shelter and descended on the Whiteface Trail and rejoined the Beaver Meadow Trail. Everyone seemed to enjoy the day.

8/12/2012: Monroe Trail to Camel’s Hump
This trip was advertised as a hike up the Jay Range in the Adirondacks. The leader changed the location to the Monroe Trail up Camel’s Hump because the weather forecast for Vermont was better than the expected weather in the Adirondacks. Everyone who had signed up for the Adirondacks came on the hike up Camel’s Hump, plus we gained one additional hiker.
Although it was quite humid in the woods, the temperature wasn’t bad, and there was a lovely breeze and sun on the top of Camel’s Hump. We encountered several others on the top and then passed a lot of people hiking up as we were coming down. On the trail, we saw some interesting mushrooms and a green caterpillar. A couple of participants stopped at a swimming hole in the river on the drive down from the trailhead. All in all, it was a great outing. Leader: Sheri Larsen; Participants: Rich Larsen, Scott Springer,Jean Cannon, Peter Cottrell, Debbie Page, Steve Page, Jacquie Heloise, Lynda Hutchins 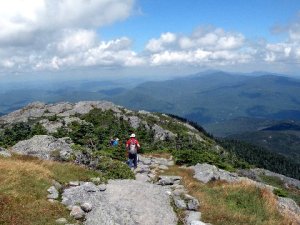 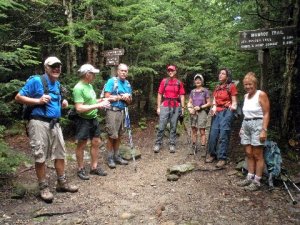 8/11/2012 Bamforth Ridge to Camels Hump
After dropping a car at the Monroe Trail, we headed back down Duxbury Road, to start our trip up Bamforth Ridge on the Long Trail. This trail never fails to impress, up Vermont’s highest ascent, from 350 feet at the Winooski River, to the 4083 feet of Camels Hump. Starting up through a climax forest, of mature maple, the trail continues on its way, 6.2 miles. Roots, rocks, scrambles, and views increasing as we make our way. From the sunny summit, we continued south on the LT to pick up the Alpine Trail. Stopping to check out the bomber wreck, on down to the Monroe trail, we finished at the trail head.
Trip Leader: Darryl Smith 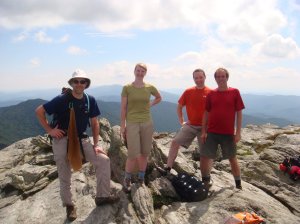 8/4/12 – Blueberry Cobbles
It was a hot day and the leader was recovering from an illness, so we did not go all the way and found very few blueberries. However, it was nice to be out and a new place for one or two participants.
Attending: Lisa Bluminghagen, Linda Evans, Dot Myer – and dog!

7/14/2012 Vermont’s Toughest Nine Miles
All were looking forward to tackling Vermont’s Toughest Nine Miles. From Smugglers Notch we headed up Vermont’s steepest trail, the Hell Brook Trail. After being led astray once or twice by the hike leader, we finally picked up the Long Trail, and were soon up and over the Adams Apple and Chin of Mount Mansfield. We dropped down a bit on the west side and scrambled south on the Subway, Canyon and Lakeview Trails. Over, under and around crags and boulders; occasionally peeling our packs off to squeeze a crevice. After a sunful lunch, we headed back north on the LT, dropping down to the east side, onto the Cliff Trail. We continued our scrambling, and shedding of packs, back to the LT. Easily on the ridge, we finally headed down the Profanity Trail, and further onto the LT, to where we started, somewhat exhausted. Held annually in mid July.
Trip Leader: Darryl Smith
Attendees: John Fowler, Scott, Heather, Rebecca Singer and Phil Hazen

7/7/12 – Mt. AbrahamTrip leader Participants: 8 in addition to leader (Russ Kinman)
Hot and muggy trip up Mt. Abe today, but with a very nice group of people. Two were very nice young ladies new to the club as well as a few old timers came. Some fast, some slow (me), but everyone seemed to have a good time. Lisa Charland, Liz Toth, Carlene and Andy Squires, Wendy Savoie, Lee and Katy Wrigley, and Joanne Mellin.

7/1/2012 – Camels Hump via Bamforth Ridge
6 participants – The weather reports at first indicated that it was going to be a great day for a hike – then they changed to ‘maybe 1 PM thunderstorms’ – then on Saturday evening they said ‘storms after 5 PM on Sunday’. So, we went, with a plan that the ‘iPhone people’ would keep an eye on the updated weather forecast as we proceeded. The temperature was indeed great, with a high of about 80 in Burlington, and about 65 on the summit. But, the woods were very humid on the way up, and the humidity took its toll – we did not set any speed records. Some talked about perhaps turning back, but eventually everyone continued. We were a bit spread out by the time we got to the summit, but all made it around 1 PM, about 4 ½ hours after we started.
(There was another group of two younger guys (a lot younger) who were ‘training for Kilimanjaro’ and started about the same time we did. We beat them to the top. They might need to train more!)
We enjoyed the summit, and eventually headed back down. There were a few sprinkles of rain on the way down around 3 PM, but these were really brief and inconsequential. We reached the parking lot around 5:15 PM, 8 ¾ hours after we started – and the clouds were indeed building on the summit. I guess the weather folks got the forecast correctly sorted out. Participants – Phil Hazen, David Hathaway, Scott Springer, Lynda Hutchins, Sheri Larsen, Richard Larsen Trip Leader
Here are some Sheri Larsen photos. Thanks Sheri! 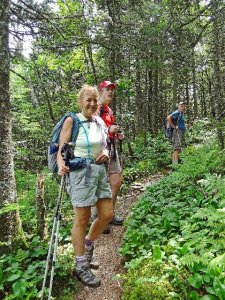 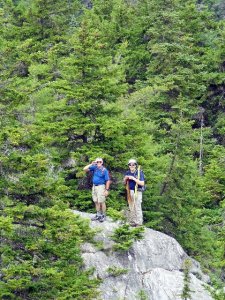 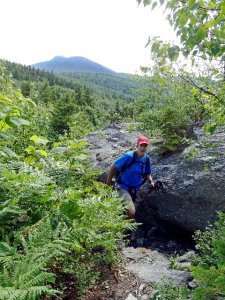 6/30/12 Mansfield Trails – Rebecca Singer, Scott Earisman, Mike Mote, Cat Erisman, Rob Selvaggi, Jean Cannon and trip leader Lee Wrigley. We had a beautiful day up to the Forehead and down the long trail. A brief stop at Buttler lodge on the way down. Many views however Scott’s dog did not like climbing the ladder. 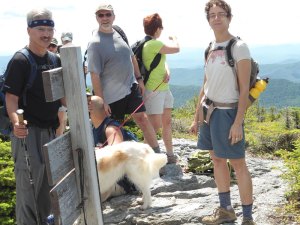 6/23/2012 Breadloaf Wilderness Loop
The Breadloaf Wilderness Loop is always such a peaceful loop; between the jolts of tripping over a root or too. Six of us started out, up the Emily Proctor Trail, opposite the direction I usually go, under overcast skies. After snacking at the shelter we continued north on the Long Trail, pass the moose poop, through the freshest green of June. We eventually arrived at Cooley Glen, and after enjoying another snack, we five headed down the trail to our start.
Trip Leader: Darryl Smith
Attendees: Lynda Hutchins, Phil Hazen, Rebecca Singer, Alan Wagner and Doremika

6/10/12 – Honey Hollow Botany Walk – We had great weather, clear and not too hot. As planned, we took 4 hours to do the Honey Hollow trail and road loop – about twice as long as we would have taken if we just walked it. The extra time was for identifying wildflowers and ferns. The early spring wildflowers were gone, but the June flowers were all out, and the ferns were about at their maximum. We identified 42 different wildflowers and 13 different fern species. We tried a few trees, but no one was particularly knowledgeable about those, so we gave up and stuck with flowers and ferns. It was a different type of hike, but seemed to go well. Another is planned for September, when the aster and goldenrods will be most prevalent. Participants – Bill Banke, Renata Banke, Barbara Wynroth, Janella Pennington, Tom McAuliff, Maury Kost, Mary Keenan, Sheri Larsen (thanks for the photos!), Richard Larsen 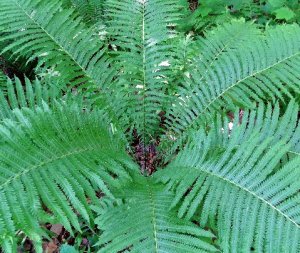 6/9/2012 Mt. Ethan Allen
Attendees: Rob Selvaggi, Mary Keenan, Mary Roux, Peter Cottrell and Lee Wrigley. We all hiked up to the small but private summit, stopping along the way so Mary could take pictures of the many wild flowers. Great weather fun hike.

May 6, 2012 Sunset Knob Bushwhack
The five of us departed the Richmond P&R, with two dogs, in two cars. We were headed to the Underhill State Park winter parking lot. We parked, and headed up the road a quarter mile or so, and after some uncertainty as to where to head into the woods, we finally did. After a treacherous crossing of the Browns River, we headed northeast to Sunset Knob. Sunset Knob is the rocky western end of Sunset Ridge, with a closeup view of Mt. Mansfield. We followed woods roads, or made our way through an easy-going, open mature forest. Wildflowers abounded. Hints of a peak peeked through, where after a short stretch of spruce, Mt. Mansfield opened up before us. Everyone was quite impressed by the promised view. After a pleasant lunch in the sunshine, we headed down, still at a leisurely pace, to our cars. Attendees: Darryl Smith, Lynda Hutchins, Don Dickson, Carlene Squires and Andy Squires.
Click Photos for larger image. 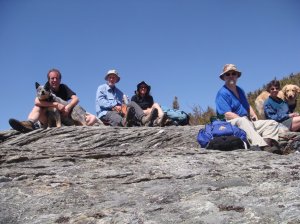 May 2012 – Spring Trail Work. Thanks to Pam Gillis and John Sharp for managing this years effort!

May 26, 2012
Trail work on the Lake Mansfield Trail and the Long Trail Taylor Lodge to Puffer Lodge. We had 9 participants. We cleared the trails with 3 main groups. It was a hot day and we were on the trails for 7 hours (a few had to turn back earlier), but it was a good work day. A number of trees were cut and lots of clipping done plus some water bar clearing/improving. Participants included: Pam Gillis, John Sharp, Fred Royce, Lisa Hardy, John Pennucci, Rick Manning, Ted Albers and Diane Stevens.

5/20/2012 – Mad River Glen
It was a hot slog up Mad River Glen. Fortunately, the humidity was low and there was a nice
Rosemarie Conn, Susan McKinnis, P. McKinnis, Lee Wrigley, cool breeze on top. Started with 11 of us, 3 dropped out. I nearly was one of them also. Katy Wrigley, Rob, Selvaggi, Mary Keenan, Harvey Schugar, Marjan Schugar. Trip Leader Russ Kinaman. Thanks to Mary K. for the photos. 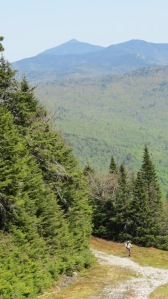 May 19, 2012
Long Trail/side trail Work Hike Butler to Taylor
Great turnout (14) and good weather. Divided into 3 groups, 2 with chain saws. One group went Nebraska Notch Trail and then the LT to Taylor, most coming back via Clara Bow trail. Another group went the Butler Lodge trail and then the LT south with a chain saw (that did have to be used). the third group went up Nebraska Notch Trail and then north on the LT until they met the second group and then they went down. Participants: Pam Gillis, John Sharp, John Pennucci, Forrest Aldrich, Phil Hazen, Ryan Bean, George Long, Carlene Squires, Wendy Savoie, Joey Corcoran, Anneliese Koenig, Richard Keach, Rick Manning, and Meg Manning.