7/26/2020 – Prospect Rock
Three late cancellations brought the group down from seven to the four of us who met at 9 AM at the Rt 15 Long Trail crossing, masked up for brief instructions and introductions, and started up. The forecast had called for sunny and hot weather, but we were happy to have a cool overcast day as we started out. As we reached the Lamoille River we descended the fixed ladder, crossed the dry channel bed (avoiding the profuse poison ivy) and crossed the suspension bridge. After crossing Ithiel Falls Road we climbed up to Prospect Rock, where we spaced out and took in the views. The breeze was effective in dissipating the deer flies. We continue to Hogback Road, to check out the other access to Prospect Rock, then retraced our steps, reaching the cars around 11:30. Participants, Andy Suntup, Linda Suntup, Dean Wiederin, David Hathaway (leader). 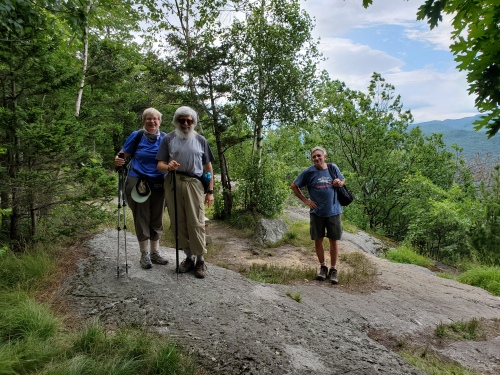 7/21/2020 – Work hike – Wampahoofus, Forehead Bypass, Twin Brooks
We met at the Stevensville trailhead at 9 AM. David was taking his new electric chainsaw and chainsaw chaps for a trial run, and John was along for safety and to help move cut branches and cut smaller stuff with a handsaw. We headed up Butler Lodge and continued up Wampahoofus. The first test of the saw came there, clearing three blowdown and leaners. The saw (an 18″ bar 56V EGO CS1800) worked very well, cut easily and quickly, and was much quieter than we are used to with gas powered saws. We then headed north on the LT to the north end of the Forehead Bypass (which neither of us had hiked in years), then followed it to the Needles Eye, and the LT to Wallace Cutoff, clearing some smaller stuff with the hand saw and one or two more with the chainsaw. We went a short way down Wallace Cutoff to a blowdown we’d been told of, cleared it, and continued on the LT to Twin Brooks. We’d heard there was a lot of work to do there, but visited all the tent platforms and saw only a couple small things to remove. There are certainly a lot of blowdowns next to the trails and scattered around within the perimeter of the tenting area, but none obstructing any access. We then headed down the ski trails, arriving back at the trailhead around 3 PM. The power gauge on the chainsaw battery said we’d use only about 20% of the 5 AH battery. Participants: David Hathaway, John Sharp.

7/18/2020 – Hunger and White Rock
We met at 9 AM at the overflow trailhead parking on North Bear Swamp Road, as the small lot at the real trailhead was full. It was sunny and warm, but there was enough breeze that the heat wasn’t oppressive, despite the 90+ F temperatures in the valleys. With masks and spread out 10+ feet apart, we went over the plan for the hike and did quick introductions, then shed masks and started up. Masks were useless unless standing still, since the humidity was high and those of us with glasses had them fog up immediately, even at rest. We started up the trail, spaced out, turning right at the junction to visit Hunger first.  We saw quite a few people and dogs along the trail, but everyone was good about stepping off the trail, or waiting until we did, and there was a pretty good breeze, especially at the top, so worries about the potential spread of coronavirus were minimal. Rock that had been in the sun was dry and provided good traction, but there were plenty of slippery and wet spots that required careful traversal. We stopped for lunch on an out cropping short of the somewhat crowded summit. At the top we saw fellow GMCers Dale Schmit and Marcus Keely who had come up the Waterbury Trail and done the same Hunger / White Rock loop in the other direction. They tried to sign up for the trip after it was full. We’d been moving pretty slowly, so at the junction for the spur trail to the White Rock summit, Susan and Ted opted to head down. Caroline waited there while Jill and David ran up and down White Rock (look carefully at the photo from White Rock summit and you can see Caroline below). We then headed back down, reaching the cars around 2:15. Participants: Jill George, Ted Albers, Susan Tobin, Caroline Deans, David Hathaway (leader). 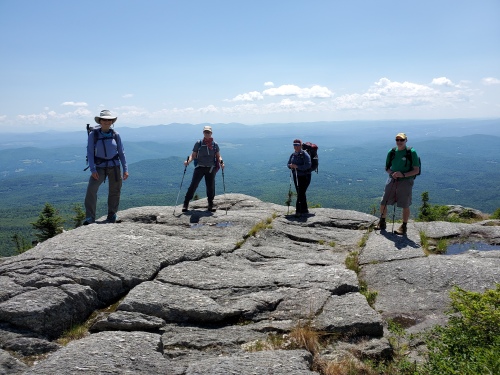 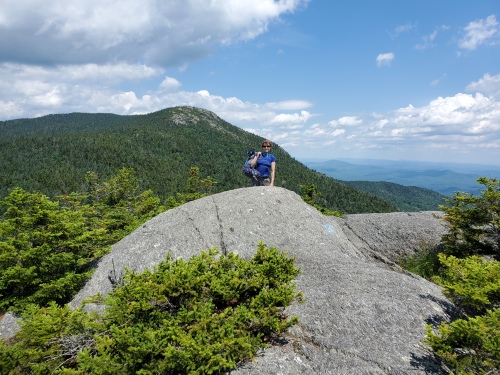 7/2/2020 – Trail work / leader practice hike, Frost, CCC, MapleRidge
This was a first practice hike under the new COVID-10 era outings guidlines (linked to here). Three of us drove separately to the Stevensville trailhead, masked up, and discussed out plan, then shed masks and headed up Frost just after 9 AM. Paul carried the chainsaw and all associated paraphernalia, and Mike and David carried bow saws. It was hot, but there was a reasonable breeze most of the way and the possible afternoon rains never appeared. At the Maple Ridge junction we headed down to the CCC road, following it to Halfway House and removing a few blowdowns, then headed up Halfway House where we removed a couple more. We had lunch spread out and off the trail halfway up. It was too hot and humid to breath or see (with glasses) while wearing masks, so we relied on keeping our distance to stay safe.We saw few people until we hit the LT, then a few between there and the visitor center, and few again from there to the Forehead and down Maple Ridge Frost. We got back to the cars around 5, said brief goodbyes, and headed home. Participants: Mike Rocheleau, Paul Beliveau, David Hathaway (leader). 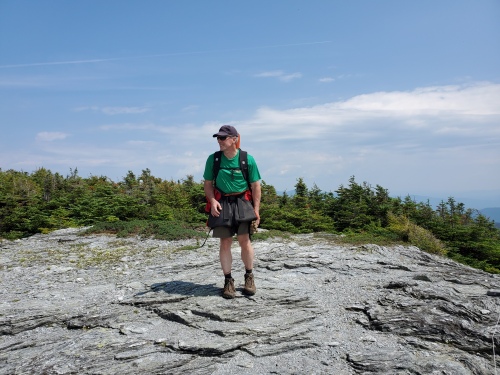 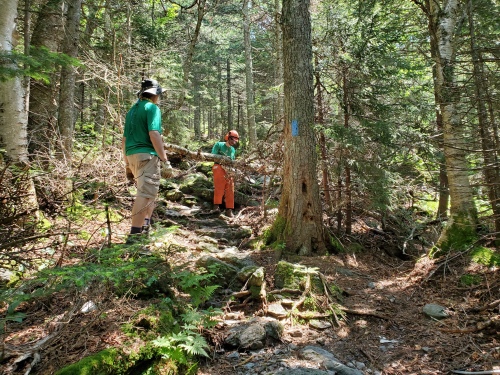 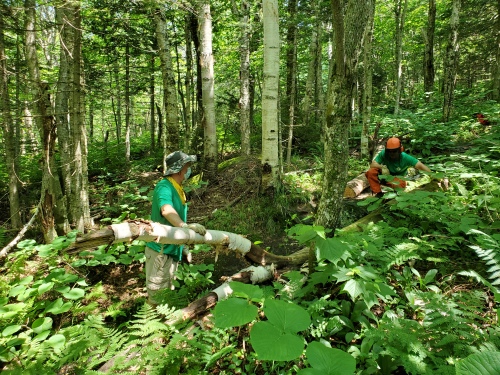 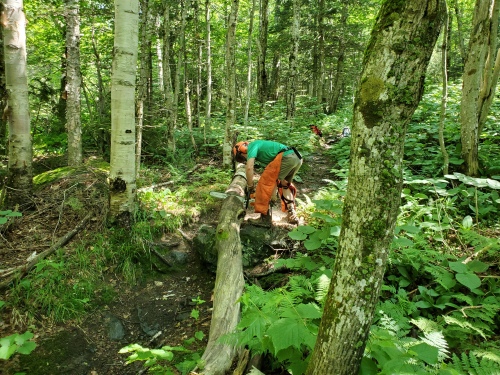