9/27/2020 – Mt. Worcester
The nine of us met at the Worcester Mountain Trail trailhead at 8 am. First time hiking this trailhead and this summit, so it was an adventure from beginning as a few of hikers lost their GPS signals on way to trailhead thus had some detours before finding the trailhead. Parking area is a loop designed turnaround with parking along edges via angle parking. We consumed about 75% of the parking spots. After brief review of hiking guidelines and introductions as we had one new hiker along this hike. Welcome John to our hike! We began our hike at approximately 8:15 am. We started out with us breaking into a couple groups due to pace variation with Ted sweeping for the hike and I started out leading. Susan, Ethan and I were up ahead in a short time as beginning was a gradual ascent at beginning. We arrived at a section of the hike where a steeper ascent began and we kept up the pace briefly but decided to take a breather and get the group back together as one. At this time I dropped back to sweep and Phil began leading the group. After dropping back from the group I decided to pick up my pace to catch up with the group. By this time Marcus and Ethan, those young whippersnappers, had begun leading the hike and were off at blistering pace at which time we did not see them until reaching the summit. The entire group arrived at the summit at 10 am at which time Ethan and Marcus greeted the group. The summit was still in the clouds as weather called for partly cloudy day with clearing skies near noon but the temperatures were in the 60’s to low 70’s where comfortable in shorts and short sleeve shirt. Summit was slightly breezy, overcast and a fairly small summit. We headed over the summit to find a spot away from the breeze to break for some eats in a small tree cove. Took a selfie-group photo courtesy of Marcus before our break. Break for eats and conversation lasted about a half hour from about 10 am – 10:30 am with our descent beginning about 10:35 am. Immediately upon us beginning our descent the skies cleared and we began to have some views of surrounding summits and the beautiful tree foliage color change in the lower valleys. Everyone paused for pictures and gave a sigh of relief that we had some views. Ted pulled out his phone with peek finder app to determine we could see Killington Peak, Bald Mountain, and Mt Hunger to name a few. Trail was extremely dry with only conditions of trail were some water accumulation in a small section about 1.75 miles into the hike and near summit as some moisture from trees on rocks creating some slick rocks in a deceptive way. We arrived back at the trailhead at approximately 12:15 pm. Another successful hike with beautiful temperatures but not too hot. Hike participants: Tess Stimpson, Bamby Pierpont-Bates, John Rankin, Phil Hazen, Ted Albers, Marcus Keely, Ethan Arrowood, Susan Tobin, and Dale Schmit(leader). Photos: Marcus, Dale, Ted. 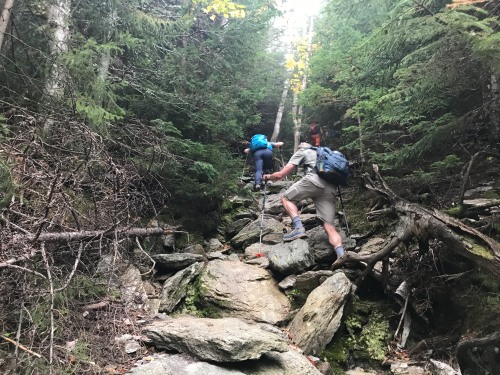 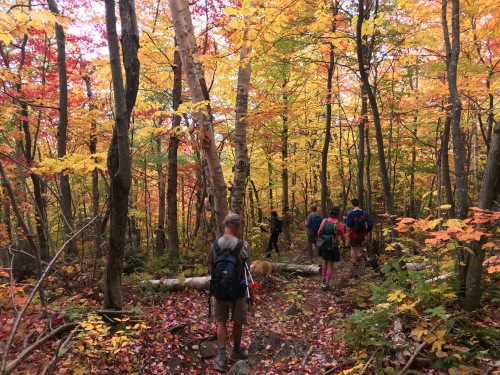 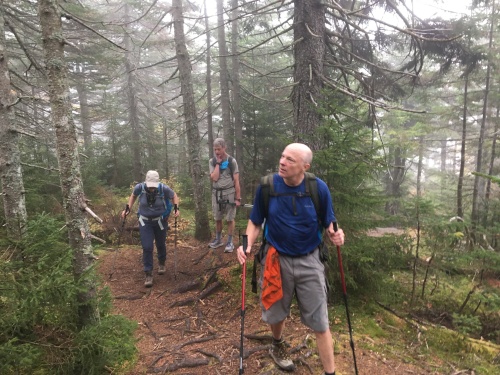 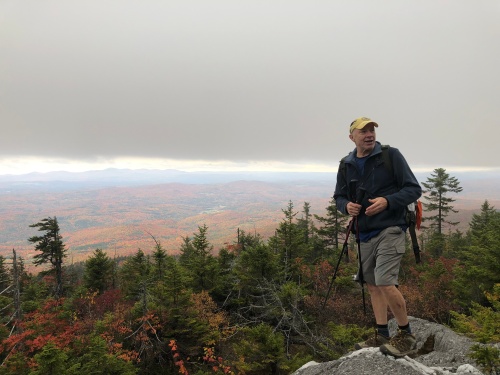 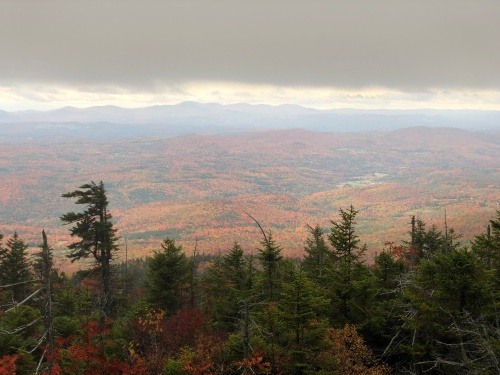 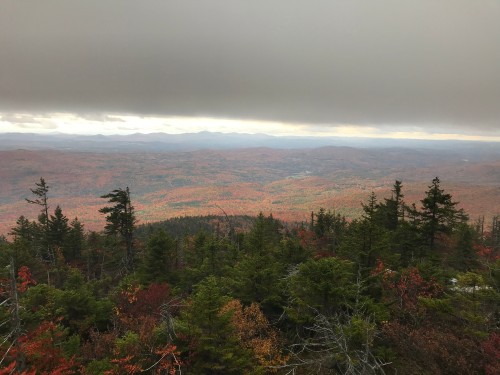 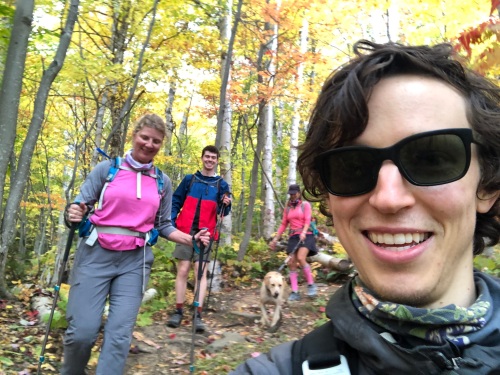 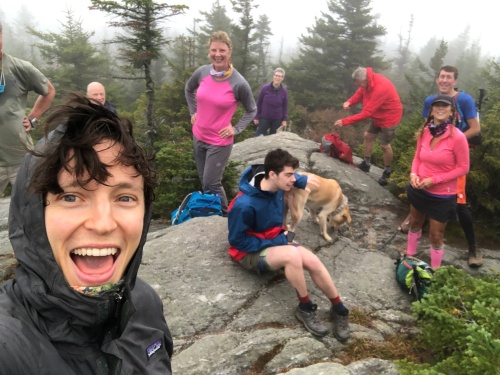 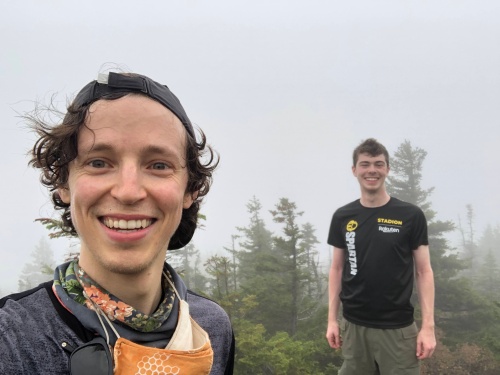 9/19/2020 – Taft Lodge 100th Anniversary hikes
A wonderful celebration of the 100th anniversary of Taft Lodge, the oldest shelter on the Long Trail! On the morning of the first hard frost of the season, we had three on the morning hike, leaving at 8 AM, reaching the lodge around 9:50, then descending the LT and ski trails to return to the parking are around 11:40. No ice on the trails, despite the early frost. After partaking of treats from the Ben & Jerry’s truck, we listened to short comments from various GMC folks and the director of Vermont Department of Forests Park and Recreation. Then 11 of us went up to Taft Lodge (in two groups, to keep group sizes below 10, according to our COVID era outings guidelines), where we installed a plaque commemorating the occasion. The day never really warmed up, so the temperatures at the lodge were probably still in the 30s F for our afternoon hikes. After the plaque installation, we all returned along the LT, arriving back at the parking area around 5:00. 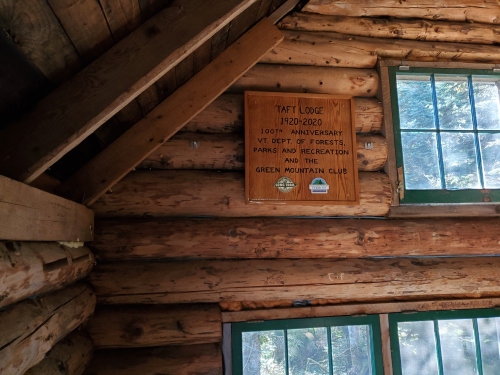 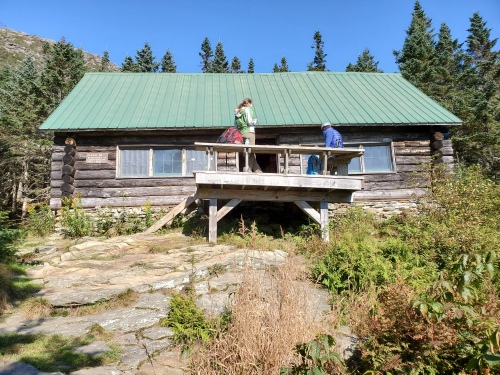 9/7/2020 – Cooley Glen to Mt. Grant
The first lead trip in COVID era with a full group of 10, awesome! We met at the trailhead to begin hike at 8:30 am. The parking lot is very small holding only about 5-8 cars squeezed in and the rest is road parking on this forest road. Began with review of hiking COVID practices followed by introductions with asking each person to introduce self and one other activity (or two if ranked evenly as a favorite) enjoy outside of hiking:

Most of us had never hiked this trail and for others it had been some time since hiked this trail so we were all in for a hike adventure. After introductions, we began the hike at 8:50 am. The first couple miles of the Cooley Glen trail portion of the hike was a fairly gradual elevation gain but did have a couple steep section runs and one where I noticed if talking it was a challenge to keep up the pace along with conversation. The lower part of the trail felt warm and balmy once began hiking with temperatures at about 60 degrees F. The hiking trail is a beautiful wooded area with much fern growth and stream bed running alongside the trail. During our ascent we only encountered 4 people descending the Cooley Glen Trail thus an excellent trail in terms of traffic flow. We arrived at the Cooley Glen Shelter at 10:30 am where we took a 15 minute break to have a snack. We all agreed the hike seemed to go fast up to this point. A hiker Ethan met at the overnight hike done on Friday and Saturday was at the Cooley Glen Shelter with her dog so Ethan had a chance to speak with her again about how the hike was going. We resumed our trek up to Mt. Grant on the Long Trail North at 10:45 am with arrival at the summit at 11:15 am. A very small summit area but an opening with beautiful views to the south of the Killington area as clear, sunny skies were the norm today. We found an area for us to gather for the group picture on the summit and had some fun moments with the group photo. After the group photo, we headed back at 11:30 am to the shelter to break for lunch with ample room to spread out around the shelter area. Arrived at the shelter at 12 pm, where took our lunch break until 12:30 pm. This is where we encountered the last 3 hikers of the day. Ted had some fun on the way down with some trail encounters involving blow downs and low tree limbs as Lorne asked for me to let him know about trail conditions. This gave Ted some ideas and thus some great photos. During our hike we discussed our next hike outside of the GMC as we put together a family hike with an outdoor/physically distancing housewarming party at Tess’s new home since recently moved to Waterbury. One of the pictures that received the most attention was our friend the cecropia moth whom made his way into the spotlight video with a little trek along the wood bridge railing to Frank Sinatra song New York, New York, My Kind Of Town. We returned to the trailhead at 2 pm with a general consensus we enjoyed this hike as change of pace from the normal challenging/technical hikes that are physically demanding on the legs/knees. Just a nice all around hike to round out the Labor Day weekend! Hike length 8 miles with 2,200 foot elevation gain, with no difficult scrambling tasks. Hike participants: Ethan Arrowood, Marcus Keely, Tess Stimson, Bamby Pierpont-Bates, Phil Hazen, John Sharp, Jill George, Susan Tobin, Ted Albers and Dale Schmit(Hike Leader). Photos: Dale Schmit, John Sharp, Ted Albers, & Marcus Keely. 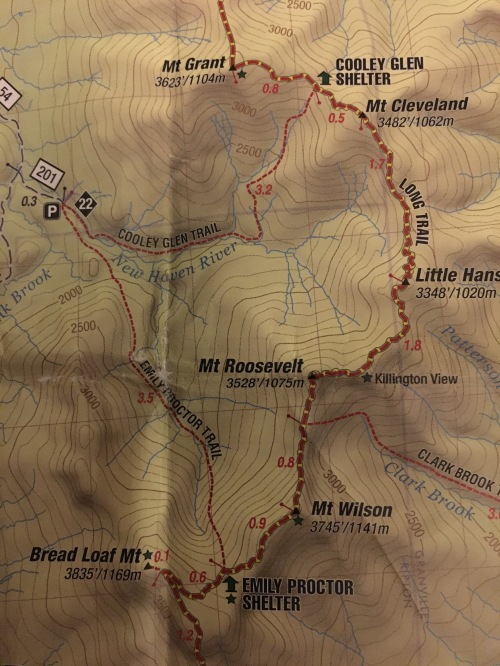 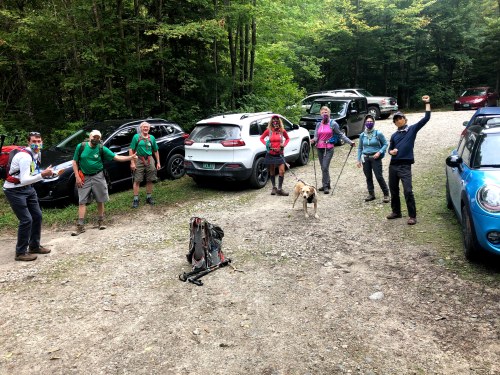 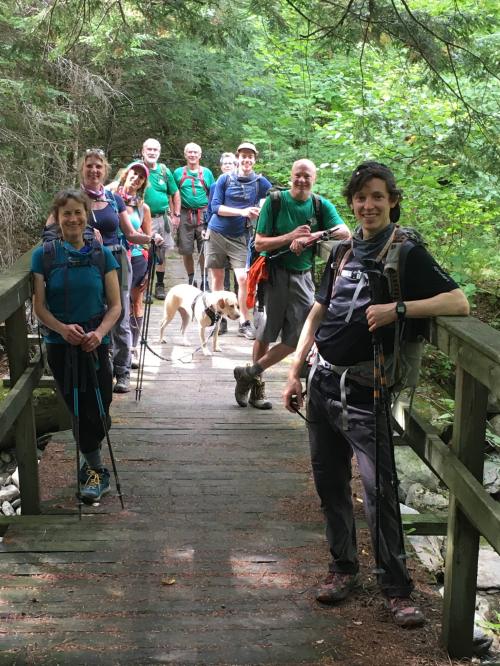 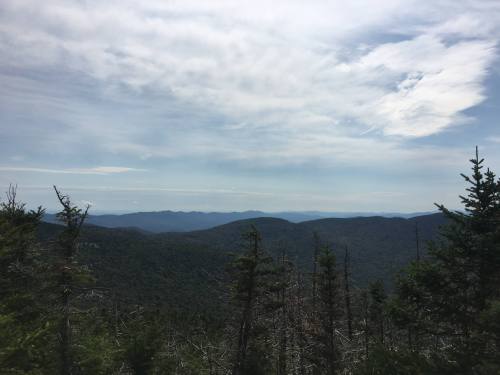 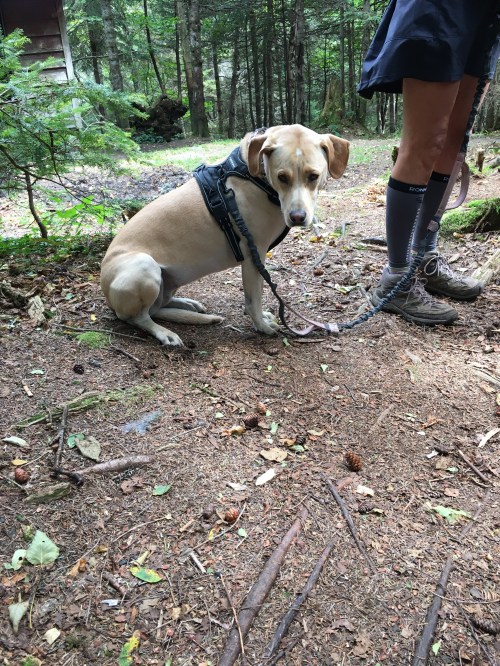 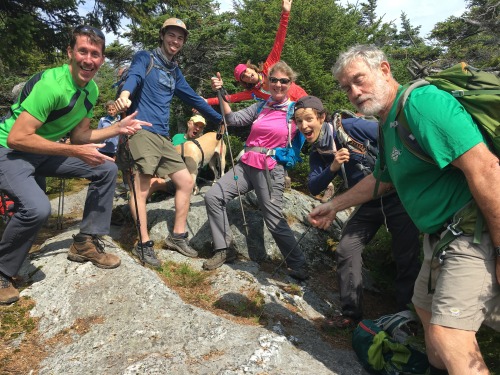 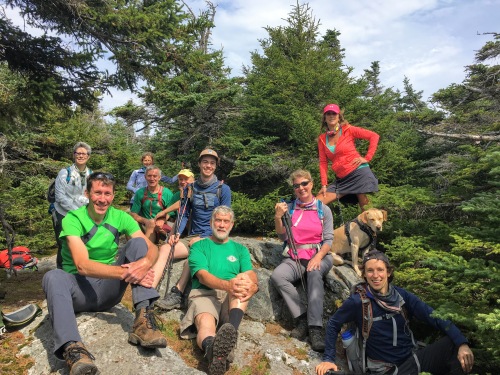 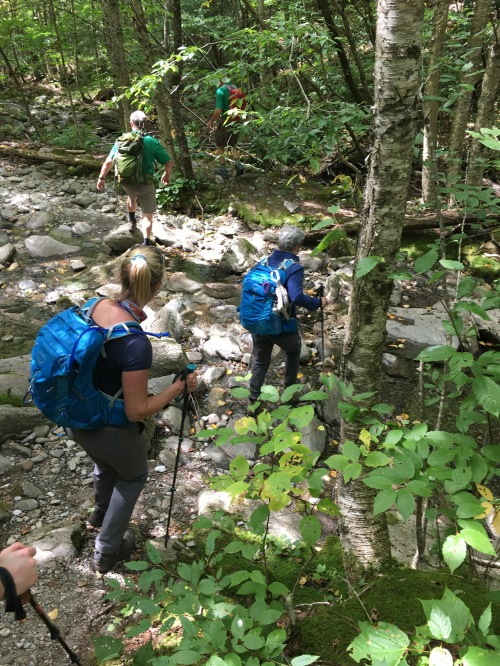 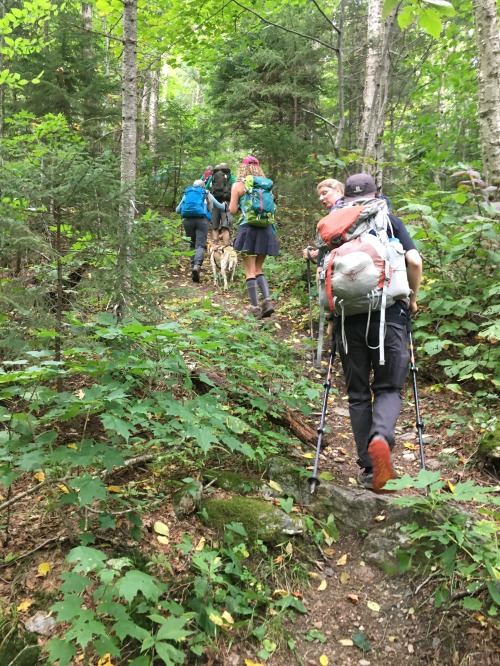 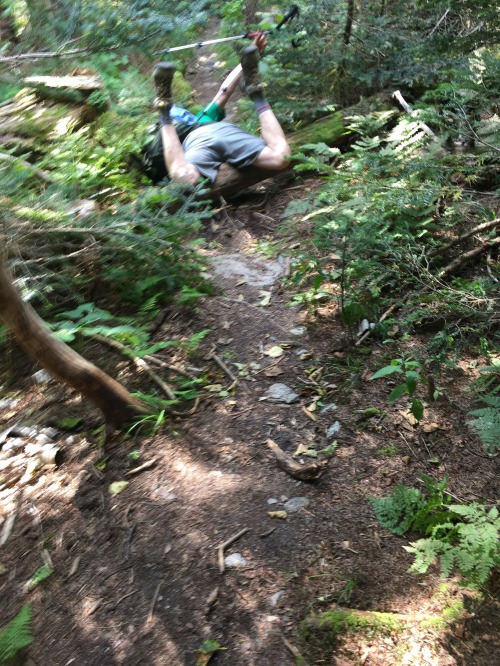 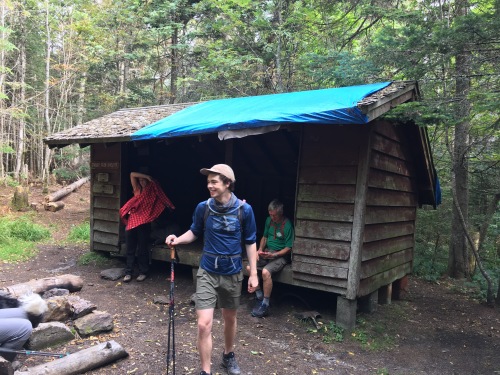 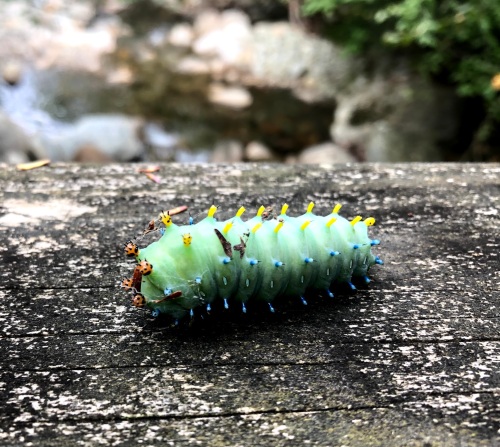