10/24/2020 – Belvidere
We met at 9 AM at the Long Trail parking area at Eden crossing on Rt 118. There was only one car there, but more arrived as we got ready to leave, and the lot was full with cars along the side of the drive all the way back to Rt 118 when we finished. Weather was typical for late October, cool, near freezing, but dry. We made good time on the way up, switching scout and sweep positions occasionally as people stopped for delayering. We got to the top around 11:15, and went up the fire tower in ones and twos to avoid crowding at the top. There was rime frost on the fencing around the top platform, but not too much wind. It was a little overcast, but views were clear north to Jay and south to Mansfield, as advertised. We spread out to have lunch, but some of us started getting cold, so three of us started down while the others finished their lunch, and got enough of a head start that we didn’t meet up again until we reached the cars, around 1:20. Participants: Dale Schmit, Marcus Keely, Jill George, Jonathan Breen, Alice Breen, David Hathaway (leader). Photos: Dale. 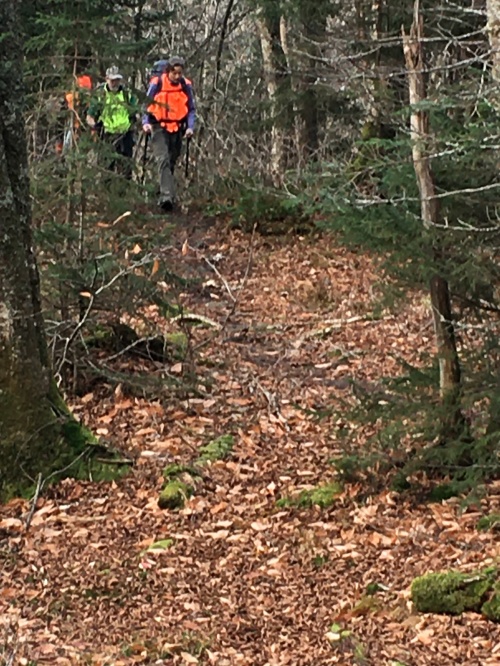 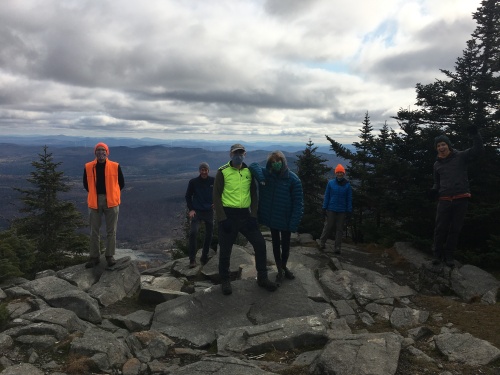 10/23/2020 – Mt Elmore
The four of us met at the Elmore State Park Trailhead for a hike start time of 9 am. State Park Gate was closed so headed to next road (Beach Road) and turned right to park across from the beach area of Lake Elmore. We waited until everyone arrived due to the parking lot main entrance closed. Susan had scoped out the park area as was coming back to beach parking lot as Marcus and I arrived. Kathleen arrived shortly after Marcus and I. We prepared our gear and discussed trail etiquette/safe hiking procedures and we were off at 9:15 am. Welcome Kathleen to first GMC hike! The beginning trail (0.3 miles) was a road surface until reached turn off to Fire Tower Trail. I would say the mountain weather forecast was off as stated no showers until 11 am. It was a light rain so not a hindrance but we were hoping for some potential opportunity of summit views before clouds/light rain took over as mountain forecast stated 0.0 – 0.1 inches of rain. I only recall one area as we approached the old ranger station which was an ascent that was a steep climb albeit brief. We arrived at the old ranger station that overlooks Lake Elmore at ~ 10:15 am but again no views due to low cloud cover/light rain. We took a few pictures/selfie of group and spent about 10 minutes at the old ranger station. Then, we headed up to the fire tower area which was 0.1 miles up the trail to arrive at 10:35 am. A few of us walked up the tower to say we climbed the tower and I wanted to see how windy/cold as a comparison to last year’s Belvidere hike tower climb. The top level of the fire tower has a half wall of plywood so able to duck below iron window panes to get out of the wind. Our hike next segment was Ridge Trail at ~10:55 am to find the next feature of Balancing Rock at which we arrived at 11:20 am. We had a little fun with some humorous pictures as pretending to hold up the balancing rock. Since weather was not conducive to a sit down break for a snack and due to the shorter distance of this hike, we kept moving with arrival at the trailhead parking lot at 12:45 pm. The interesting part of the hike was as we rounded the corner to head down to the parking lot the sun attempted to make a brief appearance feeling a bit of warmth for a minute and during the drive back to Burlington area the sun came out. Definitely a hike in need of repeating to take in the view of Lake Elmore at the old ranger station while taking a snack break so next year this hike will have to occur before end of September. Hike length 4.4 miles, 1466′ elevation gain, and loop hike. Participants: Kathleen Dwinell, Susan Tobin, Marcus Keely, & Dale Schmit (leader). Photos: Dale Schmit, Kathleen Dwinell. 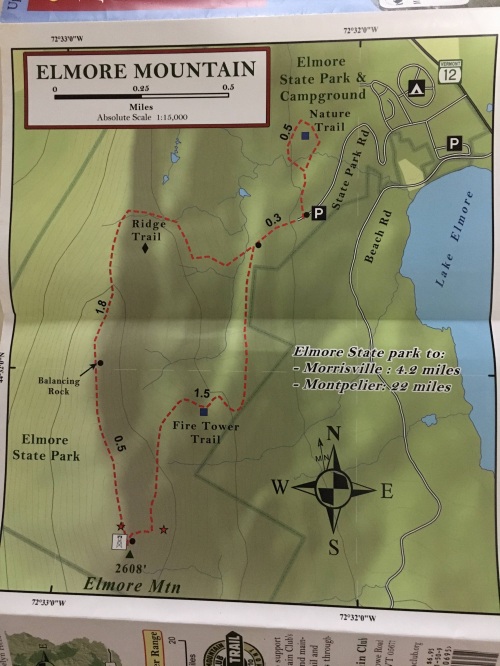 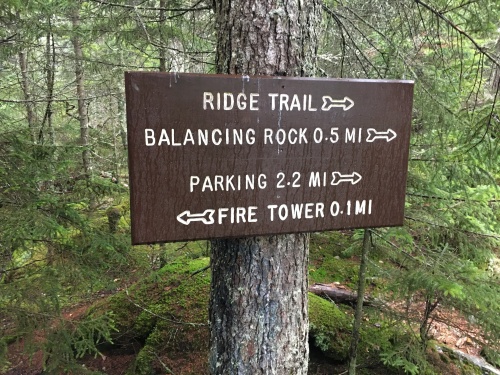 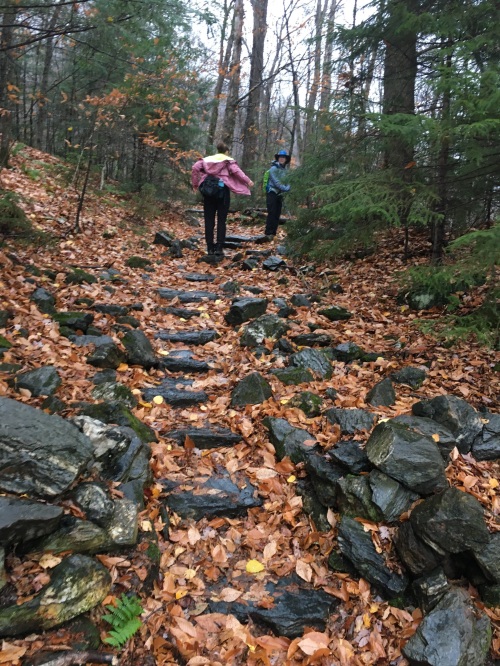 10/12/2020 – Hike Around Mansfield
The five of us met at the Underhill State Park for hike start time of 8 am.  When arrived at main parking lot nearest the pay booth at 7:40 am about half of the parking spots remained and filled up within 5 minutes. Another parking lot near the trailhead sign-in board exists so plenty of parking available for our hike start time. After a review of the hike guidelines while proceeding to the trailhead, we started up Eagles Cut Pass at 8:15 am. The first mile is a mild ascent of 600 foot elevation gain to beginning of Laura Cowles Trail which has a ~2,000 foot elevation gain in 1.7 miles to its intersection with Sunset Ridge, just below its intersection with the Long Trail, near the summit of The Chin. We arrived at the Sunset Ridge/Long Trail intersection at 9:45 am where we took a brief break to add a layer due to brisk breeze up near the summit, a quick picture of the group, and decision to continue on to Subway versus heading up to The Chin. Temperatures were approximately 55-60° F with mostly clear skies and just the right amount of sun on this beautiful Fall day. Began trek to Subway on LT South for a short 0.2 miles beginning Subway trail at 10:15 am where the up and down crawling through the rock formations and some lemon squeezers between Subway(0.1), Canyon North Extension(0.3), Canyon North(0.3), Canyon(0.3) & Lakeview(0.3) Trails. Time to get through Subway was ~10 minutes as arrived at Canyon North Extension sign at 10:20 am. These trail sections are awesome as I love crawling through these types of configurations. Some fun moments were had with shimmying through the small spaces while trying to not remove your backpack. Marcus and I were the sweepers but I believe everyone made it through without removing their packs except Marcus. Marcus had to perform the Osprey shimmy out of his pack halfway through an opening due to the replacement belt clip not releasing after replacing the clip from Osprey Company. Some saucy theme music began for a new shimmy in a caving lemon squeezer for the record books! I only had to have Marcus unclip one side of my pack harness because one of my trekking poles was hung up on the rock above. Somewhere early on this section Jill found the first chunk of ice on a cliff wall so we know what is coming soon. Some slick spots due to natural runoff of water down the cliff walls facing west but overall trail conditions were dry thus only slips that occurred were on some of the narrow trail sections of loose soil. David did not have any slide/tumble down 8 feet like last August, thus all was well. David is a valuable guide as good at recalling difficult sections of the trails. Arrived at Lakeview Trail section at 11:50 am and met up with LT North at 12:15 pm. Short distance hike to visitor center where we decided was a good spot to break for lunch(~12:30 pm) as we found an empty rock formation for sitting in front of visitor center, eating our lunch, and maintaining a physical distance as all the leaf peepers who drove up to the parking area or took the ski gondola ride up the mountain where milling around. Began our hike again at ~1 pm heading through a narrow section of trail with heavy traffic thus we were all masked up due to the having briefly navigate section where encountered a hiker with the now famous baseball style cap facemask. Who knew that a baseball cap was considered an effective face covering (WOW!). Rock formations on east side of Mansfield, Cliff Trail, were just as adventuresome and did not disappoint as notable long, narrow section near an area that had a gondola trail loop connector on each end. This section had an area where you could lean on one wall with hands and placing your feet strategically on opposite wall ledges if able to get the right leverage for moving across the space. Times are a little wonky here but I noted we arriving at LTN about 2:30 pm with recollection of heading down Sunset Ridge Trail at ~3 pm. The skies were starting to turn a little gray as the weather forecast predicted for some chance of slight rain at 3 pm and possible thunder at 4-5 pm. We took a brief break as 4 out of the 5 of us wanted to use our hiking poles for the descent. As heading down Sunset Ridge we heard some faint thunder so our timing was good and we arrived into the non-alpine tree covered area at lower levels before any concerns. Paused at intersection of LT and Cantilever Trail intersection to ensure group reconvened before heading onward. We arrived at Eagles Cut Pass at 4:15 pm for final leg of hike and a brief light sprinkle of rain occurred but lasted a few minutes. Returned to trailhead parking lot at 4:30 pm. I now have a second favorite hike along with Rock Garden. Thanks for all who came on this hike and making the hike a success. Hike On! Hike participants: Jill George, David Hathaway, Tom Mowatt, Marcus Keely, and Dale Schmit(leader). Photos: Dale Schmit, Marcus Keely, David Hathaway, Jill George.

10/4/2020 – Jay Peak
The five of us became two thus a small group at the Jay Pass Parking Lot on VT Route 242 in Westfield. Another first hiking expedition again this weekend as never been on this trail and summit thus two new adventures back to back. Parking area is a paved area on side of road. We began our hike at approximately 9:30 am. The Long Trail is a steady climb through a birch forest with plenty of conifers mixed in immediately as approach section of the trail which crosses over the ski trail at Jay Peak Ski Resort. After crossing ski trail an open steep rocky ascent to summit of about 3/10 of a mile. The mountain weather forecast called for southwest winds of 10 mph, temperatures of 40 degrees F and mostly sunny. The forecast did not disappoint as a beautiful Fall day as the summit was cloud free with awesome 360 degree views of surrounding landscapes. We arrived at the summit at 11:20 am with the summit virtually to ourselves as only a few people present. After finding the geographical marker we took a few pictures then headed over summit peak past ski lodge to break for lunch on west side ski slope where we reviewed our personal ADK hike planned for Tuesday and basked in the sun until 12:30 pm. While eating lunch, the summit became audibly busier based on conversation activity overheard. We headed back up to the summit to take a group picture before heading back down and summit was notably busy as ski tram had begun transporting leaf-peepers up the mountain to view the color changes. We masked up at 12:45 pm and headed back down the trail to navigate past some of the leaf-peepers. Once crossed the ski trail we only encountered about 6-10 people the rest of the hike arriving at the trailhead at 2:10 pm. Another successful hike and beautiful day! Hike length 3.4 miles out and back, 1,680 foot elevation gain, no difficult rock scrambles. Hike participants: Marcus Keely and Dale Schmit (leader). Photos: Marcus Keely, Dale Schmit. 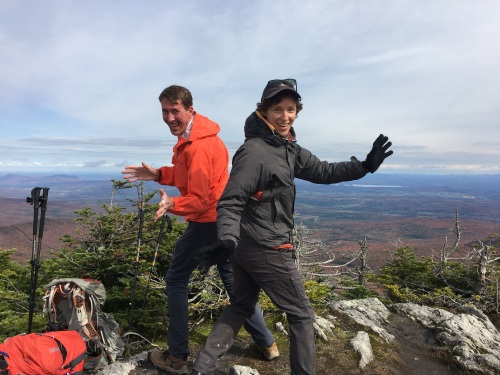 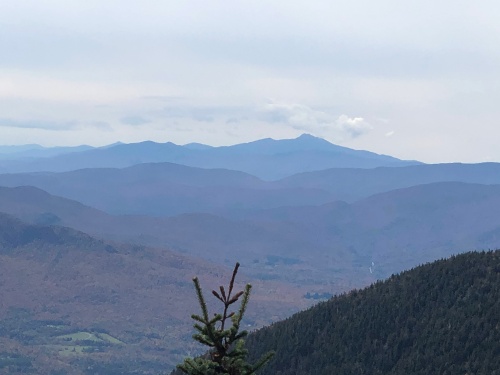 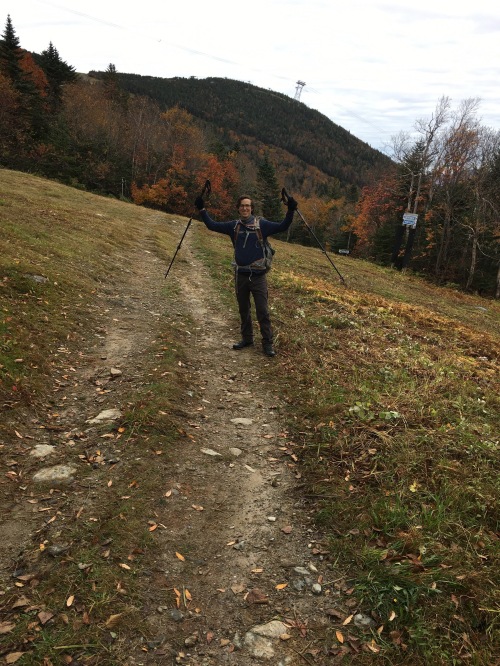 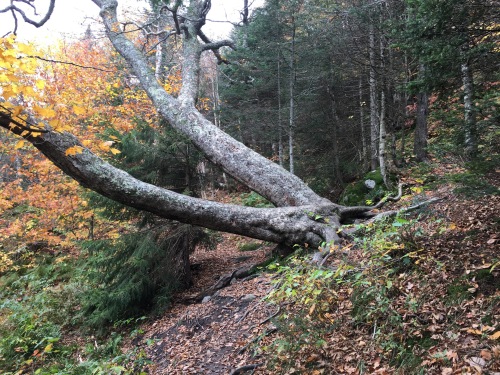